Welcome to the City of Webster Groves Budget Information page. If you have budget questions or suggestions, please feel free to contact our Finance Department at finance@webstergrovesmo.gov

The City Manager, with the assistance of the City Executive Leadership Team prepares a Proposed Budget for presentation to the City Council each spring. A Public Hearing is then held on the budget and the City Council approves the budget in June for the next fiscal year. Budget updates are presented publicly to the Council quarterly with estimates and projections on the budget vs actual expenditures. Final actual expenditures are not accounted for until the completion of the City's annual audit and issuance of the Annual Comprehensive Financial Report.

The City of Webster Groves operates on a fiscal year from July 1 to June 30. A fiscal year is referenced as the year in which the budget ends. For example, the Fiscal Year 2023 budget is named FY2023 as it ends in 2023 but is adopted in 2022.

The City will commence work on the FY2023 Budget on January 25th with the internal budget kickoff. The recommended budget will be presented to the City Council on May 3. There will be multiple internal and public opportunities to provide feedback on the FY2023 budget.

For more information on the current financial situation of the City, please see the budget information below and visit the 5-year plan page.

The proposed FY2023 Budget and supporting documents are posted below.

The public hearing on the proposed Fiscal Year 2023 budget will be held at 7:30pm on Tuesday, June 7, 2022 at City Hall, 4 E. Lockwood Avenue in Webster Groves. Oral and written comments are accepted. Interested parties may appear in person at City Hall or via Zoom. Instructions to access the meeting via Zoom are posted at https://www.webstergrovesmo.gov/568/Teleconference-Instructions

BalancingAct is a public input tool utilized by Webster Groves for budget input. Click documents below to see the comments from residents and interested parties.

Documents below detail the budget development process of the City.
Below is a list of models/scenarios that the City Council requested of the Finance Department along with the date presented.
Adopted Budget amendments to the Proposed Budget, approved by the City Council are posted below.

The Webster Groves City Council adopted 12 amendments to the proposed FY2023 budget on Tuesday May 17, 2022. Major highlights of the amendments made by the City Council include:

• The Council dedicated $991,000 towards the purchase of a Ladder Truck in the Fire Department from Capital Improvement and American Rescue Plan (ARP) funds.

• Funding was added for programming by the Green Space Advisory Commission, Sustainability Commission, Historic Preservation Commission and Police Community Engagement Board. Each of the named commissions has $1000 in funding.

• The Council dedicated $5,000 towards programming for the voter-approved Charter Review Advisory Board.

• The Council corrected a salary calculation and laid aside a small reserve of $4,000 for salary compression issues as the City implements a new pay grade system. 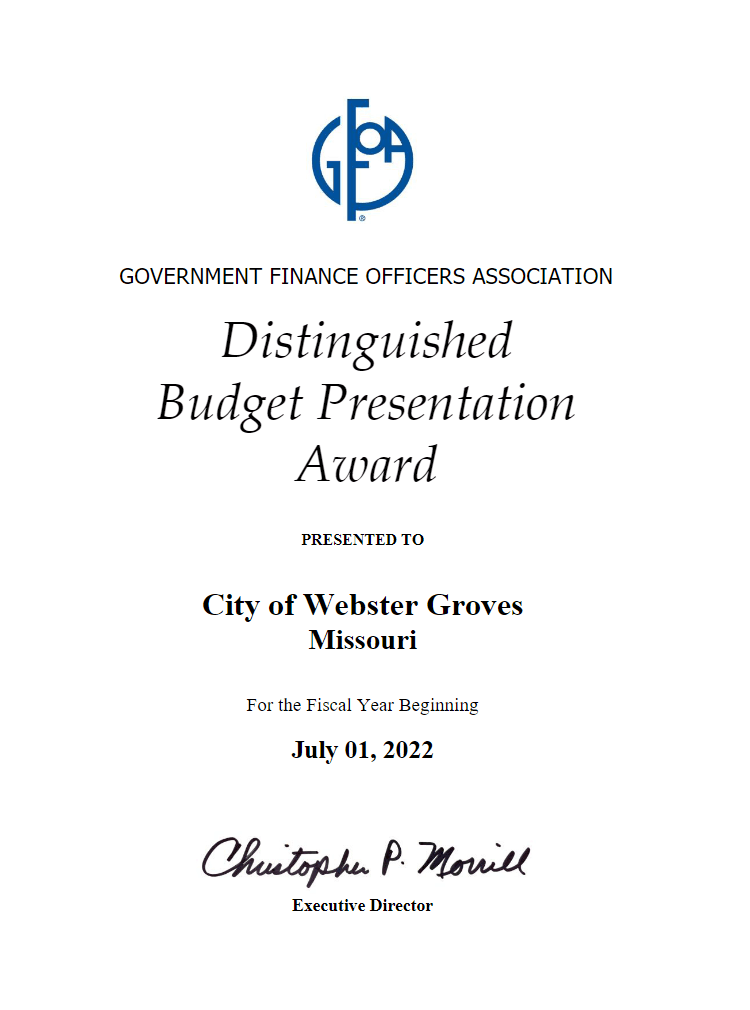